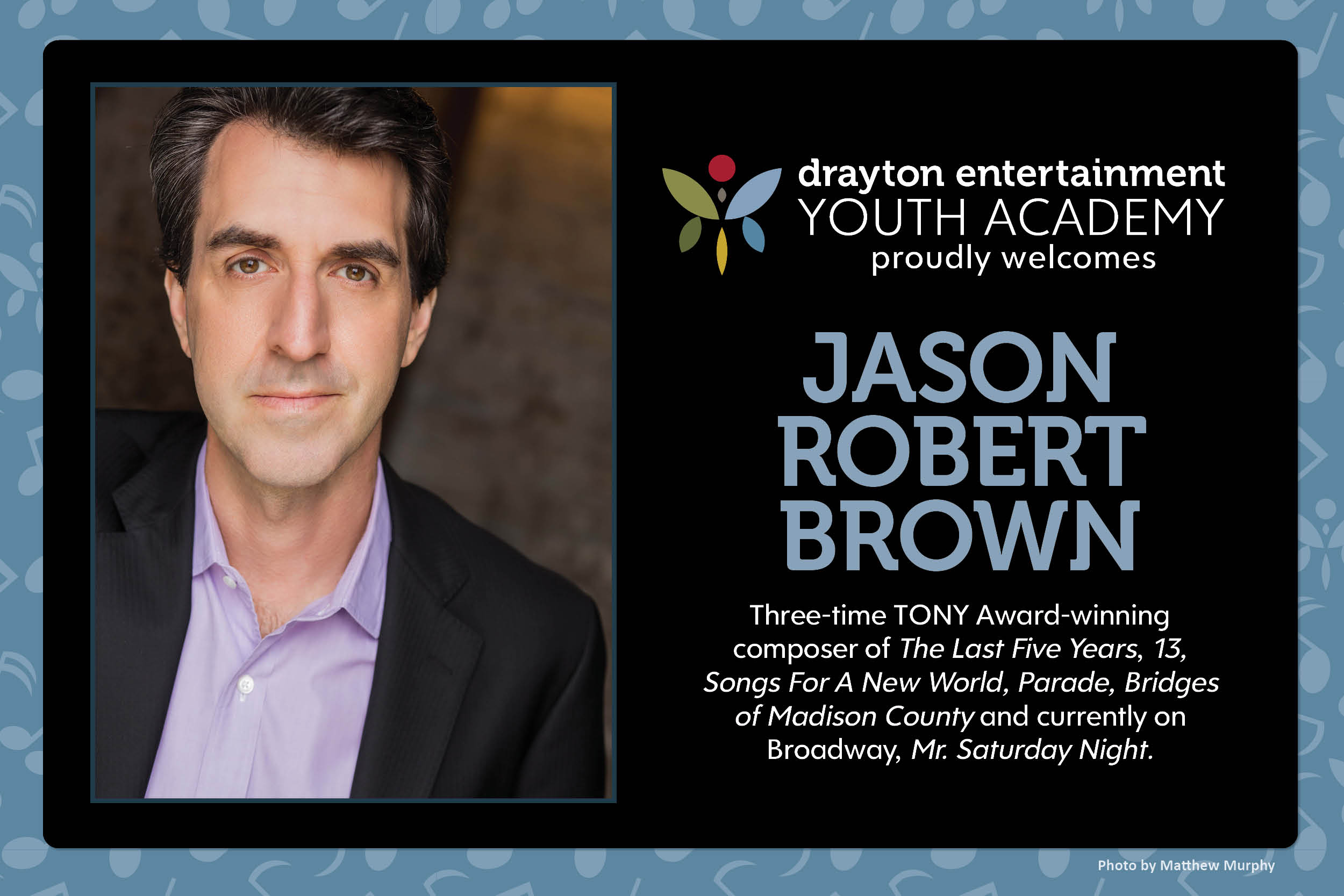 All students enrolled in ANY of our three weeks of Summer Camp will be eligible to participate in this extraordinary virtual Q&A event.

Mr. Brown is best known for his dazzling scores to several of the most renowned musicals of our time, including the generation-defining The Last Five Years, his debut song cycle Songs for a New World, and the seminal Parade, for which he won the 1999 Tony Award for Best Score. Jason’s dynamic performances as a pianist and singer have gained him a worldwide following, and his solo albums have positioned him as a trenchant and heartfelt voice for our time. His other musicals include the Tony Award-winning score of The Bridges of Madison County, Honeymoon In Vegas, and 13, which has been made into a film debuting this summer on Netflix.  Jason’s songs, including the cabaret standard “Stars and the Moon,” have been performed and recorded by Ariana Grande, Jennifer Nettles, Audra McDonald, Kristin Chenoweth, Billy Porter, Betty Buckley, Renée Fleming, Jon Hendricks and many others. His newest musical, Mr. Saturday Night, written with Amanda Green, is currently playing on Broadway at the Nederlander Theater, starring Billy Crystal.

This environment is free of judgment and full of love. Thank you for always pushing us and reminding us how important, valued and powerful we all are.

I can’t thank you enough for the courage, independence and kindness you help to instil in my kids.

Although my Dad never spoke of it to Evan or me, he was a little hesitant with the dance stuff and then theatre stuff… but then he came out of the Panto that Evan was in crying, so happy that Evan had found a place where he felt like he belonged.

This was the most amazing theatre experience I’ve had to date, and I’ve had a LOT! It’s the first time I’ve felt like I really belonged because you made such an inclusive environment.

Thank you! She walked away with more confidence about body image, an even deeper love of everything “theatre” and huge love and respect for her community!

The patience David shows to the children is perfect! As a teacher I recognize that this man was made to work with kids!! The way he speaks to kids makes them believe they can do anything!!!

This is where I want to be. I get to learn from Broadway performers who are performing at a theatre right next door but more importantly, I’ve made lifelong friends. Even the audition process is awesome. Drayton has helped me grow not only as a performer, but as a person.

My son has done lots of programs and I think he felt the most at home here. The children and staff were the most inclusive of any I’ve encountered.

Each and every day he arrived at Huron Country Playhouse, he knew he was stepping into a place where his passions and dreams were going to be honoured, respected and encouraged.

The staff involved had an incredible ability to push the kids outside of their comfort zones to try new things and take risks. Most of all, they were able to teach kids to embrace differences and that it’s okay to be different.